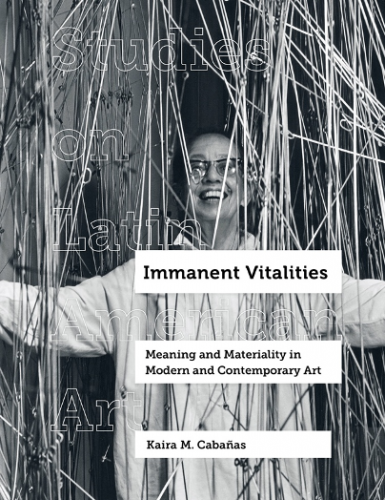 A new reality for the art object has emerged in the world of contemporary art: it is now experienced less as an autonomous, inanimate form and more as an active material agent. In this book, Kaira M. Cabañas describes how such a shift in conceptions of art’s materiality came to occur, exploring key artistic practices in Venezuela, Brazil, and Western Europe from the mid-twentieth century to the present. Immanent Vitalities expands the discourse of new materialisms by charting how artists, ranging from Gego to Laura Lima, distance themselves from dualisms such as mind-matter, culture-nature, human-nonhuman, and even Western–non-Western in order to impact our understanding of what is animate. Tracing migrations of people, objects, and ideas between South America and Europe, Cabañas historicizes changing perceptions about art’s agency while prompting readers to remain attentive to the ethical dimensions of materiality and of social difference and lived experience.

In her 5th chapter, Cabañas focuses on conversations with Balteo-Yazbeck and her experience while visiting the exhibition a little piece of heaven, 1998-2008 at the Carpenter Center in Harvard University. The artist conceived this exhibition as an intimate and sui generis, museum. One that records Venezuelan modernist art evolution from the abstract geometric tendencies in the 1950s to an art imbued with sociopolitical, anthropological and archeological practices at the end of the 90s. For this purpose, Balteo-Yazbeck included works by 13 other authors of different generations that came to make art during the last part of the XX c. in the now collapsed republic.