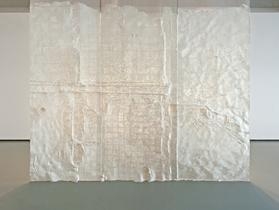 Green Art Gallery and Galleria Raffaella Cortese are pleased to announce their collaboration at the 2016 edition of Artissima, presenting a solo booth of Iranian artist Nazgol Ansarinia, in the Present Future section.

Nazgol Asarinia’s work could be described as a poetic investigation of the everyday. She seeks out the most mundane aspects of life in her home city of Tehran, isolating, framing and subtly reassembling objects to highlight their evocative dimensions. In the years since the revolution, Iran’s reconstruction has been twofold. The post-1979 economic recovery has resulted in a flurry of new buildings, along with a tidal wave of gentrification and widening income disparity. It is joined by a sustained invocation of nostalgia—for the Iranian pastoral, for ancient Persian civilisations—that looks to construct a renewed national identity and pride. In the works shown at Artissima, Nazgol Ansarinia considers these recent decades, and how these dual efforts have manifested themselves in Tehran’s urban and socioeconomic fabrics.

Membrane (2016), a large sheet of moulded paper, is a reconstruction of the single remaining wall of a demolished house in Tehran. Its surface is scanned before being recreated—a resurfacing, in her own way—as a 3D model which is then carved into a 30 piece mould. Ghosted outlines of picture frames and sofa backs and the tiling of an upstairs bathroom, perhaps, or a constellation of ledges and sockets which together hint at the original function of the space, provide an uncanny encounter that captures this inversion of public and private space.

Throughout her practice Ansarinia seeks to investigate the tension between the intimacy of the domestic realm and the fast-changing world outside it. Contrary to the historical privileging of simplicity and privacy— traditionally expressed through high walls and enclosed gardens—Iran’s culture of modesty has in recent years given way to overt public displays of status. A profusion of expensive cars and luxurious buildings indicates both the immense gain of wealth by a select few, and the erosion of long-held values like humility and modesty. This new ostentation is encapsulated in new Roman-inspired homes, that incorporate motifs from the ancient Achaemenid and Sassanid dynasties for a Perso-Romanesque architectural hagiography.

Ansarinia’s ongoing series Pillars takes up this hybrid style, in which she looks at those newly constructed homes with now-classical columns that lost their structural function and became the latest display of wealth by the new middle class. The artist ironically reuses those columns by casting them in resin and cross sections them with economic articles from the Iranian Constitution. The Pillars series, like much of Ansarinia’s earlier work, takes up the analytical potential of the decorative, especially as it relates to the everyday life of the city. 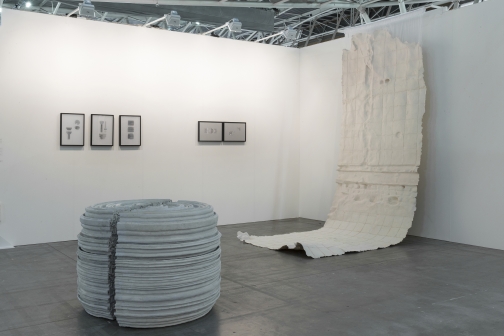 Established as one of the most relevant sections at Artissima, Present Future has kept giving new game changers to the art world for over a decade.