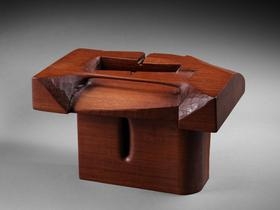 For its ninth participation at Art Dubai, Green Art Gallery is pleased to present a solo booth of Lebanese Paris-based artist Chaouki Choukini (b. 1946) highlighting key works from the last 40 years of his career across sculpture and drawing.

At times displaying Cubist overtones, at others resembling giant Kufic script folded in on itself, Choukini piles block upon block on top of each other, creating cityscapes and mountains, and revealing abstracted, silent faces. Wooden surfaces alternate between smooth, sanded and polished planes and the scars of long, thin gouges and rough chipped surfaces, like tribal markers tattooed into skin. Elsewhere, he whittles shapes down to lines so thin it seems impossible they don’t snap. They resemble the long strings of a bow, drawn out in infinite music and into perfect tension.

It is this tension – between corners and edges, form and function, and, most importantly, positive and negative space – that has come to define Choukini’s work. Each carved piece of wood exists in a delicately balanced dance, an exquisite counterpoint. This juxtaposition of space – this use of nothing – is integral to Choukini’s sculptures. In a nod to Japanese minimalism (after all, he did spend time there in the 1980s), of creation requires an element of destruction: he removes, rather than adds, to each piece. He lets in light, and light in turn becomes an integral part of the sculpture, an extra medium with which to play and manipulate the wood itself. It challenges each piece’s relationship with the space it occupies, for it is no longer a dense invader, but rather, woven into the very fabric of the air itself.

Indeed, light and space are also evident in Choukini’s delicate watercolour works, and it is here that his sculptures find their counterpoints. Shimmering visions of desert cityscapes are revealed through the haze, drawing on music, memories of places, remote villages and the vast desert itself. Here, light does not peak through folds of wood, rather, each creation is bathed in it. While the shapes – a confluence of cubes and blocks that comprise his citadelles – are familiar. Here, in contrast to the strength of wood, we see delicate watercolours, blurry shapes, applied and erased, making us squint to see it through the fog of memory. They are extraordinary visions, places existing within the artist’s memory – part constructivist patchwork, part living being, part elusive dream. 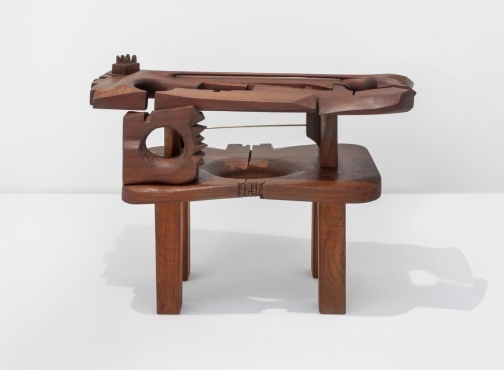 Chaouki Choukini
Back To Top