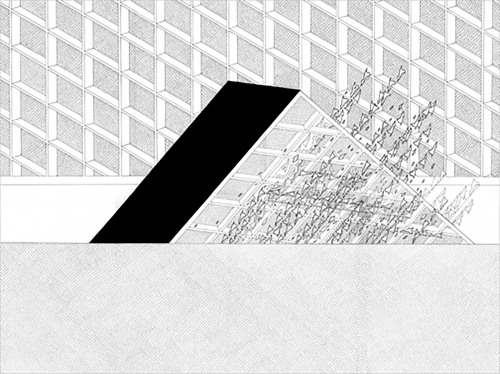 We trust the archival image in its historically validated context, than those images generated in the now. Contemporary images are too frequent and too quick for us to comprehend and form an opinion that would seem coherent. That problem doesn’t exist with the past. For one, images were not generated at the same rate as is in our present. The past is definite to the human mind. So where does that leave us with the contemporary image? Well, in a state of desperation, seeking conclusions because we have always believed in finding an end to the means. And so the frustration for both the “viewer” of an image and the “creator” of an image signifies a state of desperation – the easiest way out then is to expect and make literal interpretations by digging into our own archive of pre-conditions.

That it is reminiscent of the black cuboid and triangular volumes within compositions in Seher Shah’s ink and gouache pieces such as Black Cube 1 & 2. Delicate patterns and scribbles seem to float like soft fibrous, almost organic, forms in these pieces and their existence is dictated by the initial placement of the black shape or volume on the blank sheet of paper. When Shah explained her interest in the relationship between negative and positive to me it was this very term negative that seemed most interesting. The negative has the maximum pull rather than the patterns. So the term negative, which usually signifies the null has a much more lasting effect here than its natural opposite: the positive.