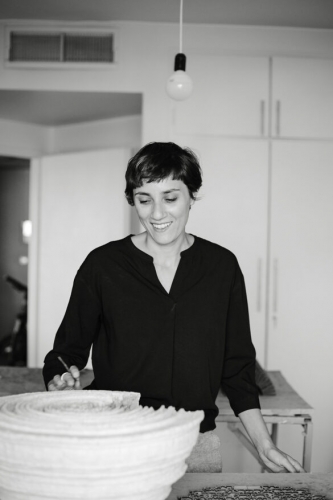 Photo by Sima Deghani for This Orient, Vol. 3

(Excerpt from the article written on This Orient Volume 3.)
There is this one city, a city I have never been to, that I have always been curious to learn about. Whenever there is a new movie or documentary about it, I am the first to see it. And yet, I have no idea what this city might be like. The name of this city is Tehran. With more than 8 million inhabitants, it is relatively large, at least by my European standards. I know that it is expanding rapidly, and, to put it with the words of my interview partner, Iranian artist Nazgol Ansarinia, ‘heading in the direction of chaos’. Even before hearing such an intriguing statement, I was thrilled to get the chance to talk to her.

Nazgol Ansarinia was born in Tehran in 1979, right after the Revolution. About five years before she was born, my own father, also a Tehran native, saw it for the last time. He left to study abroad in the early 1970s, but unlike Ansarinia—who spent seven years studying in the United Kingdom and the United States—he never returned. After graduating with a degree in Graphic Design from the London College of Communication, Ansarinia received a Masters of Fine Arts from the California College of the Arts.

Studying a multidisciplinary subject like Fine Arts was eye opening, she explains, and even today her art is still a mixture of various disciplines like visual arts, design, and architecture. Her design legacy shines through in everything she does, for her design is a way of thinking, a lens through which she analyses the world around her.