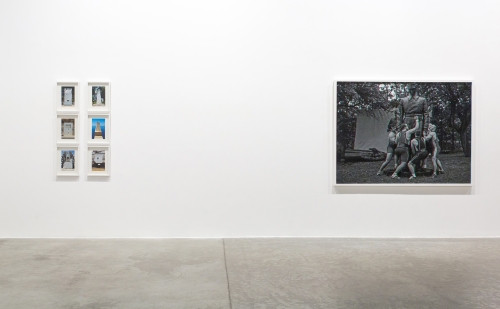 “Bravo, bravo,” shouts the commentator as a team of champion Polish weight-lifters attempt to move the gigantic Brotherhood in Arms Statue, a monument built in 1945 to symbolise Polish and Russian relations after the Second World War.

“At least a fragment of history has been removed,” the speaker adds, as the beefy men manage to shift the enormous bronze and stone weight a few inches off the ground.

It is a scene from Heavy Weight History, a 26-minute video artwork created by the Berlin-based artist Christian Jankowski in 2013, which is showing in Dubai’s Green Art Gallery.

It is part of an ambitious show titled Proposals on Monumentality, which seeks to explore whether monuments can go beyond representing the past and evoking collective memory, to expressing fragmentation and forgetting.

The pieces in the show offer a starting point for this dialogue from numerous geographical perspectives.

After the show opened last month, Jankowski was selected as the curator for 2016’s Manifesta, the roving European Biennial of Contemporary Art that will be in Zurich for its next edition.

This importance of Jankowski’s piece and its conversation reflects a shrewd choice by the show’s curator Ipek Ulusoy Akgul.

She says that the dual purposes of remembering and forgetting, erecting and erasing, were what she was looking to explore with this show.

To do so, she chose Aslı Çavusoglu, a Turkish artist whose five mixed-media works, titled The Demolition of the Russian Monument at Ayastefanos (2011), explore the deliberate destruction of a monument in a suburb of Istanbul not long after it was built in 1914.

The motif recurs in Santiago Sierra’s Conceptual Monument (2012). The simple, written document is a real proposal for a €6 million (Dh27.47m) monument for the Design Competition for the Leipzig Freedom and Unity Memorial. But it is a monument that will never be built, thus directly challenging our preconceptions of the concept of monumentality – something Akgul describes as a “breath of fresh air” in the wider discussion of this subject.

The other two artists in this exhibition are Amina Menia, an Algerian photographic artist who is interested in tracing places of memory and presents a series called Chrysanthemums, and Iman Issa, an Egyptian who subtly refers to monuments she has been familiar with since childhood through an abstract sculpture bestowed with the cumbersome title Material for a Sculpture Commemorating a Singer whose Singing became a Source of Unity of Disparate and often Opposing Forces.