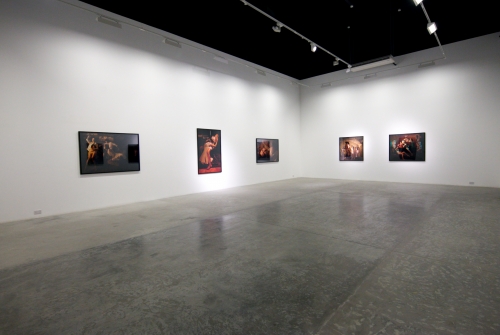 He speaks with a touch of melancholy, buried beneath a wry smile, a mood that is reflected in his latest works.

"There was a sense that life was full of potential for the girls in my earlier images. But now it's getting narrower for them, more confined, options are running out."

We're looking at Like Thieves at Midnight from Topcuoglu's exhibition Innerscapes, a collection of visions that employ the artist's familiar aesthetic: vivid interiors, garbed in textured fabrics and lined with wooden furniture, and a host of enigmatic female models who play out strange tussles for power beneath the narrative surface.

Like Thieves at Midnight, among the show's most stirring works, shows these women clambering down a cramped staircase, dressed as schoolgirls. Some are keeping lookout, while one tries to break the lock on an antique safe. "This was shot in the basement of a historic bank in Turkey," says the artist. "My back was against the wall with the camera, and it's actually three images that I merged together to get the angle."

Innerscapes continues a sequential narrative of works that began in 2001 with Early Readers, in which smiling young Turkish girls frolicked in the baroque chintz of an old library. In 2009, Topcuoglu exhibited in Dubai with Green Art Gallery, showing a continuation of that theme; this time the girls were older, and an air of simmering violence underpinned the works as each anonymous character tried to vie for power over the other.

But now, it's as if the austere grandeur of these typically Topcuoglu interiors can't hold them anymore. They bow their heads in cramped rooms. Like Lewis Carroll's Alice, they are struggling in an environment that they seem to have outgrown.

Across the images, we see several instances in which the girls wreak havoc upon their environments, whether that be raiding rooms or taking hostage the more conformist among their ranks. The suggestion being, as they outgrow their space and become more confined by the parameters of a narrow reality, a section of Topcuoglu's characters have taken it upon themselves to break through in search of something new.

A good number of these images were taken in the last months of 2010, before any notion of an Arab Spring was apparent. Yet the prescience of scenes depicting a group of people taking it upon themselves to raise the ceiling of their world does not escape the artist.