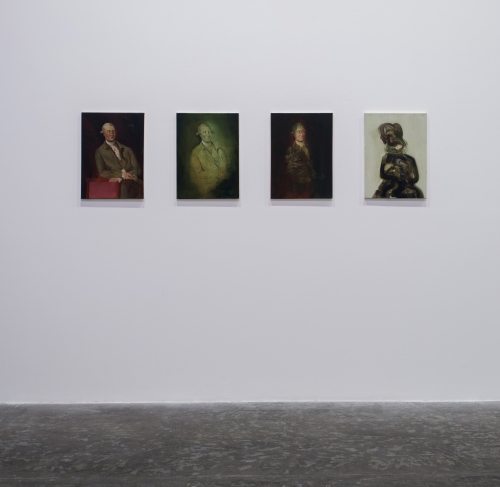 For many of us, the comprehension of abstract paintings remains a mystery. With the lack of the normal rules of shape and form, we struggle to see something in them and then ask ourselves whether we are supposed to be able to in the first place. The best advice is usually to relinquish efforts to detect structure and simply immerse yourself in the emotion of the painting – an act that usually yields an interesting experience.

But for his current show, Testament, in Green Art Gallery in Al Quoz’s Alserkal Avenue, the British artist Ross Chisholm has attempted to unite the world of abstract painting with the super-structured classical practice of portrait painting.

He has taken inspiration from the works of 18th-century artists such as Thomas Gainsborough and Joshua Reynolds and reproduced them, at times realistically and at others in an abstract form, which then gives that much longed-for structure within the swirls and strokes of colour.

“There are two languages playing against each other here, but for me, they are part of the same coin,” he says. “The abstract paintings are almost a by-product of the process of making the society portraiture.”

In The Letting Go, four paintings hang side by side and show the process of transformation from a carefully reproduced portrait to a blur.

“This one makes the process seem linear, but it is actually more of an ebb and flow from representation to abstraction and back again,” explains Chisholm.

“I’ve always thought of my work as cross-pollinating with each other, so that style of classical painting sits happily within the language of an abstract painting. In some ways, these are the detritus of the process of creating a more structured piece.”

The main pieces in the show are Lords of Misrule, which takes up the entire back wall of the gallery, and The Exhibitions Verisimiltude, a very minimal piece made up of three or four brushstrokes.

“They are quasi portraits whose integrity is never strong enough to be wildly convincing, but they still read figuratively,” says Chisholm. “I’m interested in not just the paintings themselves but the role of the artist in society, especially at that time [18th century]. They were arbiters of taste.”

In some ways, the most interesting part of Chisholm’s work is that in the 18th century, the beginning of the age of industrialisation, the portraits and the people who had the means to commission them were indicators of a certain status in society and so, as Chisholm says, they held an influence over their audience. By linking them to abstract works and placing them in a 21st-century context, Chisholm is perhaps questioning the elite nature of art. Nowadays, it is abstract paintings and their looseness of meaning that can set one viewer off against another in terms of perceived comprehension.

In that respect, Chisholm chose the title Testament for his show as “a play on the dialogue and the idea of truth and veracity in representation”.

So, with the mystery removed yet somehow still present, it is possible to view the show in the safety of your own reactions.

“It is also about materiality,” says Chisholm. “The decontextualisation of these materials and forms is what I find interesting. When the narratives and stories become lost over time then the materiality takes over, it brings out a physicality in a piece of art. In some ways, I don’t see work as being complete at any stage.”