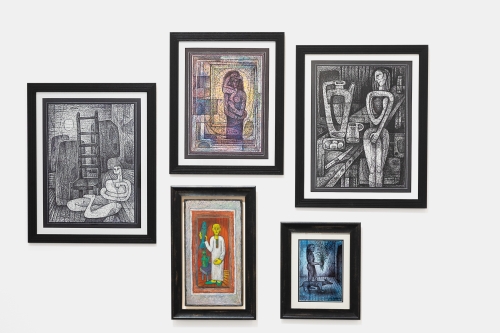 In a 1974 oil painting by Samir Rafi, a wolf snarls in the face of an ­encaged man. The animal wears an ­expression of grim determination, and he encroaches on the space of the hapless prisoner, curled up behind bars. Both man and wolf are painted in fine, spindly brushstrokes, with slightly angular contours that make them look like emblems of folktales, and their eyes are interchangeable.

There’s no suggestion of an equal power dynamic, though – the beast is the clear winner.

Rafi’s work was animated by the political struggles and social inequality of his native Egypt. He translated this into powerful paintings of wild animals, pharaonic symbols, and – perhaps surprisingly – distinctly everyday items, such as wooden chairs and earthenware jugs, in a celebration of the common man of Egypt. Historically, he is a bit of a conundrum among the canon of modern Arab art.

He was part of the Art et Liberte in Cairo in the late 1930s and 1940s, the main exponents of Surrealism in Egypt, as well as of the Contemporary Art Group that followed – whose concern with Egyptology was looked down upon by the more internationally minded Surrealists.

Rafi left Cairo in 1950 when he ­received a scholarship to the Sorbonne in Paris, and thereafter remained aloof from the main currents of Egyptian art. ­Perhaps his starry new pals in France’s capital were too much of a draw. Although mostly described as an introvert, he managed to cross paths with both ­Picasso and Le Corbusier.

His work therefore has a sui generis quality to it, with recurrent themes and scenarios that examined his country from afar. Rafi lived in Paris until his death in 2004.