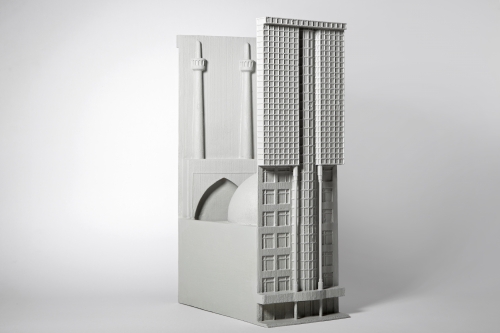 Nazgol Ansarinia’s Mendings interrupted the ‘wholeness’ of the notion of domestic furniture by neatly slipping out the middle segment of a selection of plates, a chair, and a mattress, and cementing the remaining halves together with an impenetrable scar. Ansarinia was well represented across the exhibition, Mendings constituting only one of her pieces.

Fabrications, a group of dollhouse-sized sculptures, was also specially commissioned for the exhibition. Her cutting-edge use of three-dimensional printing lent smooth facades to the paintings found on tower block structures in Tehran, thereby creating a hybrid architecture that mixed visions of a grandiose past and the reality of a ‘sober’ present. As well, the delicate newspaper mosaics of the installation, Reflections/Refractions echoed the tessellation of shapes over the museum’s entrance.