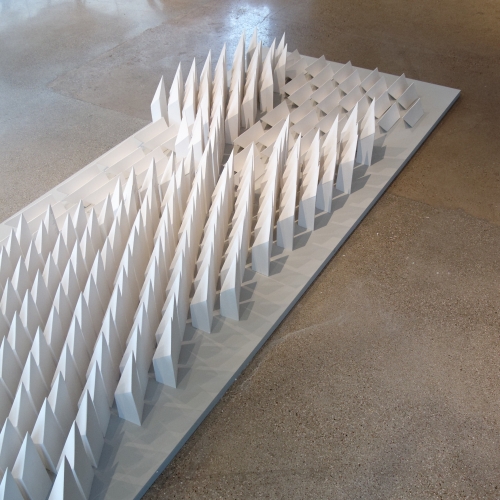 In the gallery lobby of Seher Shah's exhibition Constructed Landscapes is Object Repetition (Line to Distance) from 2013, a collection of a thousand or so six to eight-inch tall plaster trapezoidal solids arranged on the floor. One corner of each solid extends sharply upwards, allowing the collection of solids to divide into groups that face similar directions, like soldiers. Many groups of varying numbers and directional preferences intersect turbulently with each other, a sort of geometric ocean eddy. In these moments of flux the individual trapezoidal solids lose connection with their armies and spin off into new territories and outcast groups. Whole groups of solids have fallen over and many have acquired new markings. Because the work is small and spread out on the floor, the viewer sees the whole scene from above. The entire arrangement of objects is still, but through the use of shape and composition the work acts as a diagram of some unknown event or movement, like a technical illustration reproduced outside of its context.

Shah's series of images, Mammoth: Aerial Landscape Proposals, (2012), also works with birds-eye perspective. The work is a series of twenty-one framed images arranged in a three by seven grid on the wall. Taken from not-quite-directly above, the photographs feature various altered landscapes from sprawling urban development to agriculture to large-scale industrial landscapes such as oil fields. The slight perspective on each image conflicts with the artificial grids and land use patterns, distorting the sense of space as the eye quickly flips between reading flatness to reading great depth. In half of the photographs Shah digitally collages new geometric shapes onto the images, further flattening the affected compositions. Shah’s introduced shapes are interesting. Generally rectilinear and angled solids, each remains unique from the others. All are either solid black, solid white, semi-opaque black or semi-opaque white. Often Shah overlays the shapes onto the photographs without reference to the underlying photographic perspective, but occasionally the shape's angles and edges align deliberately to the landscape geometries below. At times they work to obscure, in the way that the military might redact a document's sensitive truths with deliberate blackouts. When the shapes are translucent they instead act like a map of potential re-development, highlighting the areas of the built environment proposed for clearance and renewal. The shapes transform these aerial photographs into obscure diagrams whose concept is left unexplained.