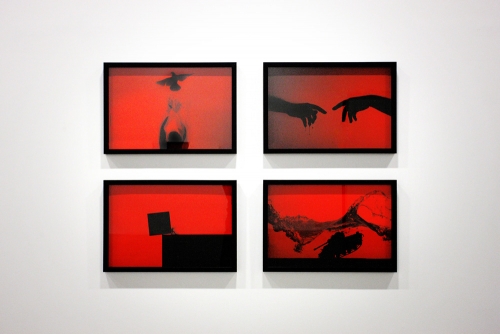 Damascus-born photographer Jaber Al Azmeh began his latest series during the crucial early stages of the revolutionary movement in Syria. The artist asked those in his social circle to reenact their experiences demonstrating, until clashes between activists and the regime forced him to flee to Doha, Qatar. While in exile, he completed this project of striking red and black photographs, even appearing himself as the subject of a few of the images. MutualArt spoke to Jaber Al Azmeh about the difficult climate for artists in Syria and his vision for this poignant series, “Wounds,” currently on view at Green Art Gallery in Dubai.

Although Syrian contemporary artists face harassment, detention, or worse if their work is considered subversive, this is not the first time Jaber Al Azmeh utilized art to make a powerful political statement about his homeland. The artist called the photographs ‘portraits’ in his previous series “Traces” although the images contained no people at all. Focused on mundane objects like rusted oil barrels, dilapidated houses and abandoned busses in the suburbs of Damascus, the images manage to portray ugly, forgotten objects in a visually compelling manner, making statements about waste and those who left the discards behind. Al Azmeh reflects, “That series was very eerie, almost haunting, and looking back at it now it feels like it was almost a premonition of what was to come - The quiet before the storm...”