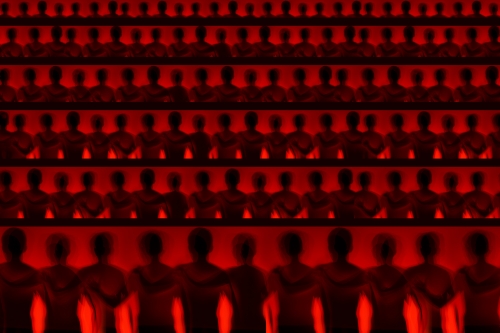 "We all knew there was a red line before the Syrian Revolution that was not meant to be crossed and we stayed on the other side of that red line because we wanted to live. But then, it happened. The Revolution began and we crossed the line. But once you cross it, there is no turning back. The fear which held you back before is still there, but it is insignificant compared to the cause at hand. There is a time when people must put their fear behind them and fight for what they desire – for what they feel is just.

It was in the midst of this mood that I came up with the concept for my work The Dungeons. I was still living in Syria and we kept hearing of friends who were being captured and put in dungeons where they were placed in very small cells at times the size of two by two meters for 15 people – so small the prisoners couldn’t even sit down. In reference to this unimaginable situation, my photograph depicts people squeezed between two walls and struggling to move. A lot of prisoners told me that they could not breathe anymore. The feeling of suffocation is thus what I wanted to show. I then posted my photographs on Facebook so that I could share the horror of what was happening."