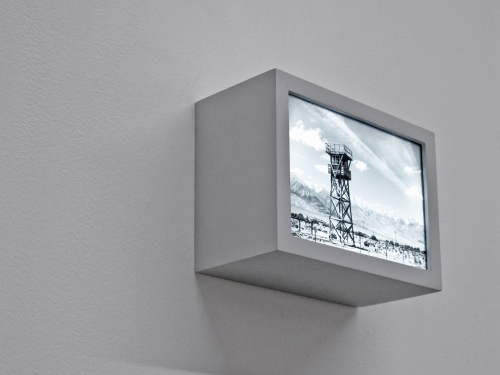 Modernism's hard edges haunt Seher Shah, but it has not lost its edge. Geometries divide and multiply her images, like memories. When she looks at a city, she sees concrete and social engineering, but she is also looking within. Masses hover over her photographs like threats, but also as monuments and mirrors. That makes "Object Anxiety" more whispery than anxious. It is a fitting monument to the fabric of a city all by itself.

Maybe it is just coincidence that her show opened days before the September 11 National Memorial, but she shows a man overlooking a port city. It gleams with distant light off the water, on the edge between day and night. It could be an immense architectural model, like actual plans for the Long Island City waterfront, formed from hundreds of points of light. Not at all coincidentally, Shah lays out white trapezoidal pyramids on the floor. Both cities, in the photograph and in sculpture, are anonymous and familiar. I wanted to pick out where I was that day and where I lived.