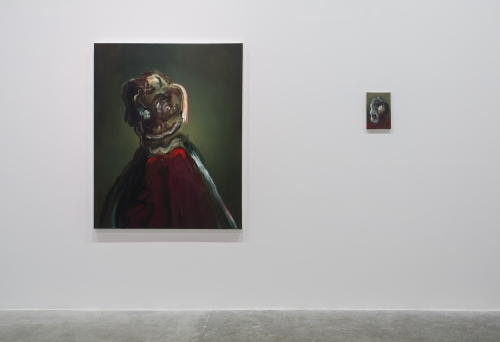 The paintings in British artist Ross Chisholm’s first solo exhibition in Dubai, titled Testament, are based on society portraits from the early days of the industrial revolution in Britain, but presented with a modern twist. In an earlier work, Chisholm has distorted traditional portraits and photographs from the 1970s, by interventions such as injecting geometric abstraction and combining figures from different centuries. In his latest body of work he continues his experiments with realism and abstraction. His paintings decontextualise historical images and trace the process of decay and restoration of art, opening up dialogues of dislocated histories and ambiguous identities.

Chisholm’s paintings appear to be in a state of flux between the process of construction, deconstruction and reconstruction. On some canvases, portraits inspired by the paintings of 18th-century British artists such as Thomas Gainsborough and Joshua Reynolds are visible beneath new gestural strokes; while in others they are completely obliterated by abstract forms and vaguely look like human figures. Some works are presented as triptychs documenting the changes from a detailed classical society portrait done with a fine brush, to a faded image that ultimately dissolves into a flurry of gestural strokes.

“In the art world there is a lot of discussion about reality and abstraction in painting. My work raises questions about whether what you are seeing are portraits or purely abstract paintings, thus presenting a playful ‘testament’ to the nebulous nature of this discourse,” Chisholm says.

The artist’s work has been influenced by his visits to the conservation departments of museums, and it essentially captures the journey of a work of art, and of art itself, through time. “When you look at X-rays of 18th-century portraits you can see the many layers of the original compositions as well as the underlying abstraction from which the figure emerged. The act of conserving a piece of art is interesting because it involves reconstructing a work hundreds of years after it was originally created, and long after the artist is gone. It makes you realise that a painting continues to change over time, as the original composition deteriorates and is then restored by new hands for a new audience. I love this idea of temporality and want to express it through my work. But I am also making these works timeless by removing the original portraits from narratives and contexts, and putting them in a contemporary context,” he says.