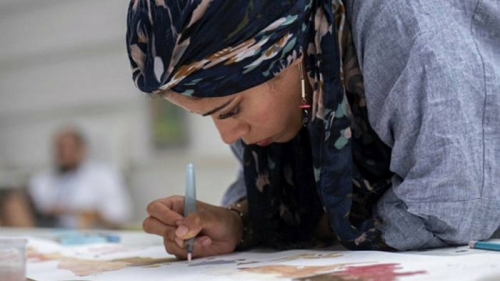 How are young, homegrown talents making a name for themselves and who are they?

As the UAE allows more personal freedoms, a younger generation of local artists are seeking to work in ways not dictated by official institutions or commercial groups.

Having recently announced significant social liberalisation, allowing unmarried couples and unrelated flatmates to live together for example, the United Arab Emirates also hopes to attract more cultural capital as part of efforts to diversify its economy.

As local galleries pay more attention to young talent, they are picking up artists who are socially engaged, and inspired by changes in their environment.

Ms Al Dhaheri for instance, the first Emirati artist on the Green Art Gallery’s roster, recently incorporated her own hair in swirling paintings that question the social constructs around hair in the Middle East, which is treated like an intimate body part through its absence or presence — in veiling and unveiling. “I’m interested in the new generation of female Emirati artists that are recently coming out and the language and the social concerns they are relaying in their work,” says gallery director Yasmin Atassi.

The UAE may not be a prolific exporter of contemporary art, but it is starting to become an incubator for new talent. As Ms Dhaheri puts it: “Institutions need to realise that they are the support system and enablers, not the content producers.” Alongside brick-and-mortar institutions, artists are building their own infrastructure of change, in the in-between spaces.