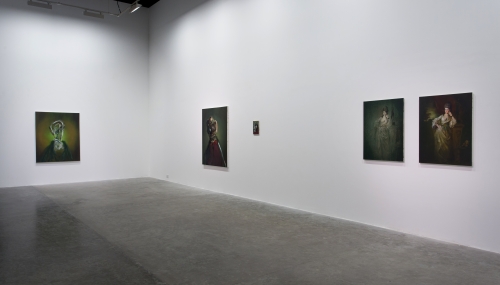 Were Ross Chisholm born into 18th century British society he would have had three viable career options: gentleman farmer, chimney sweep, or portrait artist. Although he might have been quite the sought after portraitist, he thinks of the nascent industrial era as grim and is relieved to be living in present day England, burning brown toast in the kitchen, listening to Bonny Prince Billy and painting from a rented Central London studio that is damned to become a bourgeoisie café in a matter of months.

Testament, his first show in the Middle East, is running at Green Art Gallery in Dubai and showcases his wonderfully odd reproductions of 18th century portraits. The high society subjects in said portraits had such strong presence that we whispered in subdued voices throughout our interview as though they could hear us and disapproved with raised eyebrows. Some of the portraits are traditional and quite realistic but with a twist of punk morbidity (See his 2009 work Henrietta, Countess of Warwick without her Children to see the perfect example of what I’m talking about). Others are so abstract that it’s difficult to even think of them as portraits at all, save for the lace collar or lapel that identifies the bust of a subject.

Whoever installed the show did a clever job arranging the works in a surprising way—the most diminutive portrait hung right beside the largest, and so on. Also of note are the provocative titles like “Lords of Misrule.” Chisholm adds his titles as a poetic, linguistic flourish only once a work is completed. Sometimes the titles happen by chance, like the time a flustered London gallerist hurriedly named an untitled painting, “Still Life Wtih Flowers.” More delighted than mortified Chisholm kept the title with the spelling typo.

Chisholm is in dialogue with old school British painters Joshua Reynolds (1723-1792) and Thomas Gainsborough (1727-1788), who were known for portraits commissioned by British aristocracy who paid handsomely to be immortalized on canvas. Fascinated by the effects of history on art, Chisholm spent time in university and museum conservation departments, which sound a bit like art morgues: “I saw so many disfigured paintings. Time has become a material quality of the work and they are yellowed and darkened.” What had happened to these paintings over time was something beyond the patron or the artist’s intentions, and decontextualized them entirely.

While all this death and decay would be enough to make most artists question the lasting legacy of their practice, Chisholm felt inspired to take his more realistic reproductions and experiment by adding layers, then peeling them back to mimic the effects of time: “Although people find faces in them, these aren’t portraits to me. They are abstractions, the residue leftover from the process of making reproductions.”