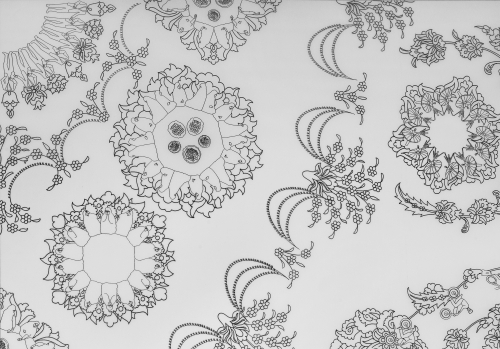 Born in 1979, the Tehran-based artist graduated from the London College of Communication in 2001 before taking a Master in Fine Arts at the California College of the Arts (CCA) in San Francisco in 2003. A few years later, she took part in two artist residency programs, Cittadellarte Fondazione Pistoletto in Italy (2006) and Nordic Artists’ Centre Dalsasen in Norway (2007), where she experienced distinctive approaches to artistic practice. While in Italy she was able to work in the context of multiple exchanges with other artists. The more individualistic approach of the Norwegian program enabled her to focus on her own projects and set the basis for her Patterns series, as she was reflecting on social and economic issues in a city like Tehran.

Ansarinia’s art has gained international recognition at an early stage of her career: a winner of the inaugural Abraaj Capital Art Prize (2009), she was also a finalist in the Rolex Mentor and Protégé Arts Initiative (2008). An acute observer of cultural differences and similarities, the artist has a keen sense of “how local iterations of a culture might act as a site for the hopes and fears of those living in a (faltering) globalised world”.

Ansarinia recognizes the importance and effects of her travels on her works which focus on issues from her immediate environment. Interested in everyday experiences, the routinized and the banal, inspired by everyday objects and events, she visually investigates various social structures and closely examines all these interactions before making them her own through a process of deconstruction and reconstruction. Being part of a culture in which there is a complex side to the most simple matters of life, her work intends to reveal some of the intricacies and hidden relationships behind seemingly banal aspects of daily life. Her concepts and the works based on them are elaborations on the familiar and extensions of everyday reality. The starting point can be the occurrence of an event, the experiencing of a daily routine, or the noticing of an object or image; once she consciously looks for the re-occurrence of any of these particular events, her concepts gradually take physical form.