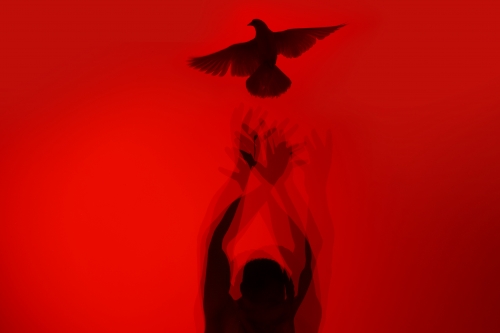 Given that the immediate cause of the upheaval in Syria can be traced to a piece of street art, the importance played by artistic expression in Syria’s uprising is self evident. Those artists within the country struggle to continue working amid the escalating chaos, often with no access to studio space and limited materials, while those who have fled join the ranks of Arab artists forced to work in exile, cut off from their cultural milieu. Among the internationally renowned artists remaining in Syria are Youssef Abdelke, Sabhan Adam, Ahmad Moualla, Kais Salman and Fadi Yazigi. Others, such as Jaber Al Azmeh, Houmam Al Sayed and Abdalla Omari, have been forced to flee. Key facilitators of Syria’s cultural scene have also had to relocate, among them Mouna Atassi, the owner of Damascus’s Atassi Gallery, who has moved temporarily to Dubai.

Among the artists who have left Syria, there is a conflicting sense of freedom and of isolation. Some have begun to create openly political work, almost impossible pre-uprising. Al-Azmeh, now based in the Gulf, created A Small Group of Syrians, which he hasn’t exhibited yet. This brave and moving series captures key anti-regime figures, each holding a copy of the Baath newspaper, graffitied with a revolutionary message. “It’s one of the Syrian government’s most prominent symbols,” he explains. “The paper is turned upside down in the photographs – toppled – and used as a surface of new and free thoughts, thus overturning the daily chronicle of government lies.”