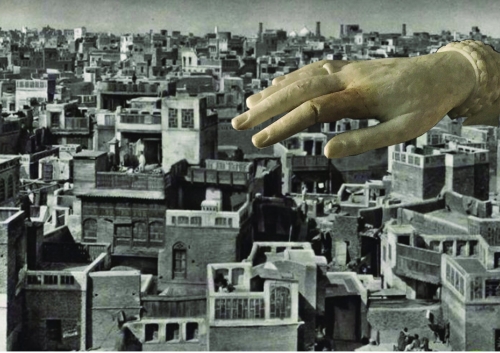 In a conversation with Hera Büyüktaşcıyan, Huo Rf talks about the artist's practice, the relationship of time and space/place and how the concept of freezing time and fossilization relates to her works.

"While traveling through the Indian half of Punjab in 2016-17, I wanted to see the other half of the border to see the whole picture. After the division in 1947, Lahore, once the capital of Punjab, was hit majorly by this division after staying on the border with Pakistan, and lost the Sikh (Sikhs) community, which was the largest population at the time but now seen as a minority, due to forced migration. In early 2019, we went to Lahore to continue my research in partnership with Hajra Haider Karrar, an independent curator friend of mine.

During our stay, we started to examine the Sikh structures that were completely abandoned after 1947, partially destroyed, partially transformed, and partially taken over by land mafias. The video work 'Infinite Nectar' that I showed at the Lahore Biennale (2020) was the result of this process.

In the film, we listen to the city from a marble hand that is wandering between the past and the present, moving between two Sikh structures that have turned into invisible spaces. The marble hand I am talking about is a reflection of a sculpture made to represent Maharani Jindan Kaur's hands that I saw in the Lahore Museum. Jindan Kaur is a Punjab queen and, although less mentioned in history, a female resister who fought against the colonial forces. Because the British have kidnapped her son and exiled her, she was separated from Lahore and passed away in a place far from her roots. In the film she returns to her roots as a ghost, and we can say that she creates a narrative about a corpus that is settled deep in the space and about historical breaks, as she travels between yesterday and today, between death and life, movement and petrification.

This video has become an important part of the process that I mentioned earlier and which started with collages. It offered me the opportunity to experience many agents of stasis and movement that I have accumulated throughout my practice, in a medium that is relatively very new to me."