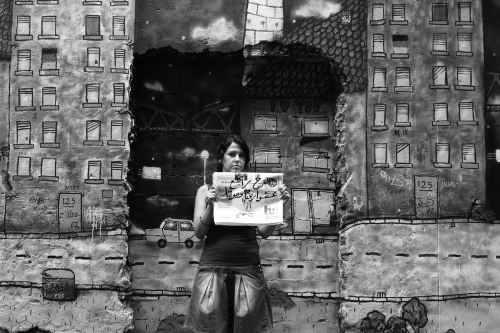 Meanwhile, just as art spaces have been transformed, so too has the work Syrian artists are making. Many have made political works they never would have risked under the regime. Jaber Al Azmeh, a Syrian photographer and professor now living in Doha, created two series of photographs documenting the revolution. Fearing the regime, he only published a few of the images before leaving Syria.

One series, “A Small Group of Syrians,” consists of images of artists and activists holding up the Ba’ath newspaper (the newspaper of the regime), only with anti­-Assad messages written over the print.

I hated politics in my life, I think it’s a really corrupt part of humanity and I never went into it too much. But, being a part of the revolution wasn’t about being political. It’s our life now, it’s a matter of survival, it’s our country, our people and everyone was participating.