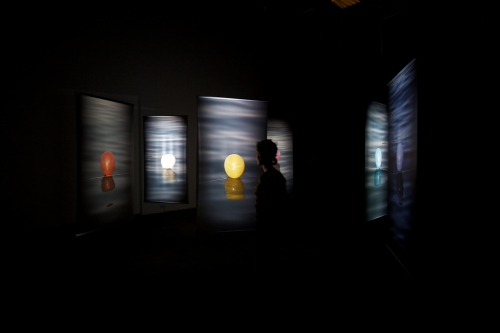 Every other March, the opening of the Sharjah Biennial coincides with Art Dubai. The former’s critical aspiration and ambitious sprawl combines with the glitz and glamour of the fair to make an overwhelming surfeit of contemporary art.

Amid this year’s March Madness, Hale Tenger’s multichannel video installation Balloons on the Sea, 2011, at Green Art Gallery, provided much-needed space for reflection. Inspired by a common distraction along the Bosphorus in which patrons pay to shoot BB guns at floating balloons, the work’s main projection featured a single, colorful string of the inflatable objects accompanied by a spare, plinking score. A maze of smaller screens behind the main one depicted individual balloons bursting and coming back to life, intimating resilience in the face of violence, while Tenger’s simple inversion of the image in the main projection, causing the balloons’ reflection to dissolve as it rippled upward, lightened loads and lifted spirits.