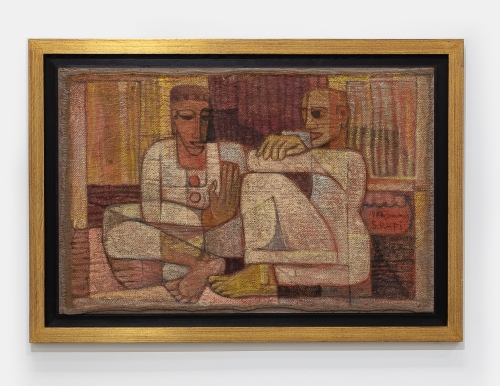 “I really wanted to spotlight an artist who hasn’t had the recognition that he deserves and hasn’t been shown properly,” says Yasmin Atassi, director of Dubai’s Green Art Gallery. She is talking about the gallery’s current exhibition — a solo retrospective of the late Egyptian modernist Samir Rafi.

“He was a deeply intellectual artist, who created his own visual language and universe that is full of symbolism,” Atassi explains.

Considered one of Dubai’s first contemporary art galleries, Green Art Gallery opened in 1995 as a salon d’art in the neighborhood of Jumeirah. Pioneers of modern Arab art — including Iraq’s Dia Azzawi, the late Syrian artist Fateh Moudarres, and Lebanon’s Hussein Madi — roamed the halls of the gallery and showcased their works to enthusiasts and collectors.

Once a year, the gallery, which has sinced moved to Alserkal Avenue, steers away from its contemporary art shows of conceptual installations and digital art and goes back to basics, developing research-driven exhibitions of a historical context, revealing museum-quality works by Middle Eastern luminaries of the twentieth century.