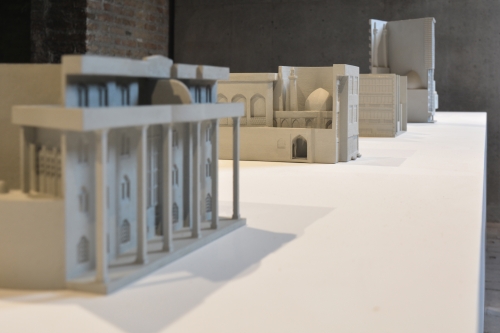 For its inaugural exhibition in the newly renovated Argo Factory building, Pejman Foundation presents The Room Becomes a Street, a solo exhibition by Iranian artist Nazgol Ansarinia. Conceived as a series of discrete interventions dispersed throughout the foundation’s galleries, the exhibition is Ansarinia’s largest presentation to date and surveys the artist’s work of the last 15 years in sculpture, installation, drawing, and video.

Argo Factory was one of the major drink manufacturing factories in Iran during the 1960s and 1970s. Its construction dates back to early 1920s as one of the first industrial factories in Iran. In spite of its unique architectural features – high smokestacks and strategic geographical position at the heart of the city – the factory was abandoned for almost four decades. In 2016, Pejman Foundation acquired and reconstructed the Argo Factory and turned into one of its multiple sites.