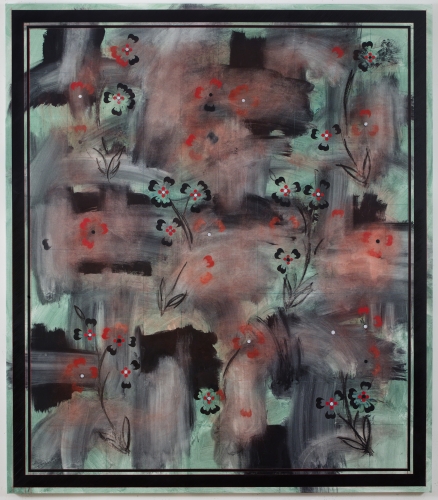 The present exhibition pulls into dialogue the work of two artists—Kamrooz Aram (b. Iran, 1978) and Anwar Jalal Shemza (b. India, 1928 – 1985)—concerned with the relationship between ornamental art and modernist abstractions. In the works selected for this exhibition, form and process both contribute to the investigation of the line drawn between “art” and “ornament.” And by juxtaposing two generations of artists, the works feed into rich investigations of the historical patterns of artistic development, erasure, and abstraction.

In 1956, Shemza attended a lecture at the Slade School of Art, having recently moved from Pakistan to the UK, and was devastated to hear Ernst Gombrich characterize Islamic art as purely “functional.” From there, he sought to dissect this characterization and, as Iftikhar Dadi has written in his essay “Calligraphic Abstraction: Anwar Jalal Shemza,” he brought “the dangerous question of ornament and its relation to modernism” to a point of crisis in his work.

Shemza’s diasporic perspective, as an artist with a deeply studied understanding both of Islamic aesthetic principles and the tradition of geometric abstraction in the West, allowed him to explore modernism through a uniquely doubled prism. In his work from the late 1950s and early 1960s, he fused a formalist vocabulary of simple shapes and colors in the tradition of Mondrian or Klee with textiles and prints covered with sinuous lines recalling the calligraphic strokes of the Arabic alphabet or the repeated patterns adorning carpets and fabrics. In direct parallel, Kamrooz Aram, born in Shiraz and having received an MFA from Columbia University, has developed an artistic practice emerging from both Western and non-Western motifs and materials.

The present exhibition features a selection of Shemza’s aquatints. Printmaking was a crucial aspect of the artist’s career, as he concentrated on etching while studying at the Slade School and later hoped to establish a printmaking department in the National College of Art, Lahore. Creating abstract, geometric, borderline-decorative compositions, he found that intaglio processes allowed him to achieve precise and subtly multilayered images. As a medium, aquatint requires repeated processes of adding, taking away, and reversal before the final print is achieved, emphasizing the acts of mediation that result in the final object.

The prints thus find parallel in the work of Aram, whose paintings renegotiate histories and provide a contemporary perspective on the distinction between art and ornament. In his work, he reconfigures floral motifs from Persian carpets in paint, subtly altering repeated elements to simultaneously establish and interrupt a visual rhythm. Aram’s painted compositions reveal their own histories, emerging from repeated processes of the building and destruction of patterns. In doing so, they show how the areas of paint that cover and erase also build up new surfaces and call attention to the foundations they obscure. Meanwhile, his palettes play with the function of color—as seen in black paint that simultaneously frames, censors, and decorates. Complicating form, pattern, color, and process, in this way, Aram forces apart the units of the ornamental and destabilizes every aspect of the visual and material result.

When brought together, Shemza’s prints and Aram’s paintings attest to the repeated patterns of construction and destruction that have shaped the narrative of art history. They invite us to question the status of the ornament and to meditate on the acts of creation that bring them about.