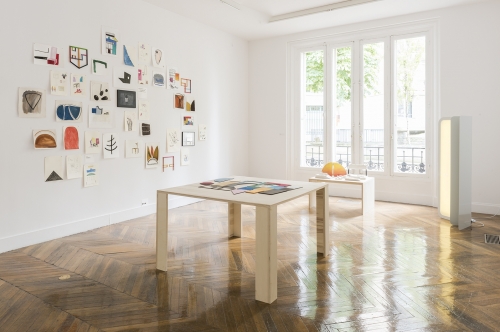 For Hands, Spells, Papers Ana Mazzei explores the materiality and the pictorial representations generated by the host of interlock­ing visual cultures making up her native Brazil, whether their sources be indigenous, colonial and Catholic, ethnographic and scientific, or con­temporary. Inspired by the emancipa­tory ideas of Paulo Freire and Augusto Boal, her work oscillates between representation and direct experience of the artwork within an ephemeral, performative and inclusive dimension.

During her May-July residency at La Galerie, she will be using the exhi­bition as the theatre for her own production processes. The exhibition opens with preliminary drawings, some of which then fan out through the art centre space, with the spell intervening in the passages from sketch to plan to volume. At certain points visitors will find spaces where they can make physical contact with works that the artist has set up, waiting for them.

Hands, Spells, Papers is a kind of variation on the three-choice hand game Stone, Paper, Scissors. “Stone-paper-scissors theories” yield enlightening analyses of the colli­sions between chance and prediction, one of them being that if players could play in a completely random fashion, this would be the best means of obtaining a one-third probability of winning. The theories also teach us that there is no possibility of gen­erating a random sequence without the help of a machine, dice or coins. Thus being competitive in this hand game most often hinges on analysing the behaviour of the opponent who, aware of being observed, changes strategy so as to remain as unpredicta­ble as possible. In addition to captur­ing of the undivided attention of the players, their striving to simulta­neously spot the opposition’s logic and scramble their own sequences reduces the chances of winning via this deductive technique even further; ultimately the best players are those who manage to eliminate all appear­ance of logic from their choices. Thus chance seems inaccessible for the human mind, which is too logical, too predictable and too concerned with connections. It’s here that the spell comes into play as a factor for disorder: instead of mimicking chance, let’s let the spell get to work and magic dictate an extra-human scenario that spares us any effort at anticipation and improvisation. Slipped in between stone, paper or scissors, or between hand and paper, the spell spares the player any urge to control and any advance planning. To welcome the spell is to recognise a form of random imaginative power, to enable the passage from hand to paper and from project to act with no anticipation of the effects of this shift. Here we have another kind of radical hospitality, the kind that loses control and trustingly hands things over to the spell. Beyond the control of the hand, the spell renews the hand’s taste for play.