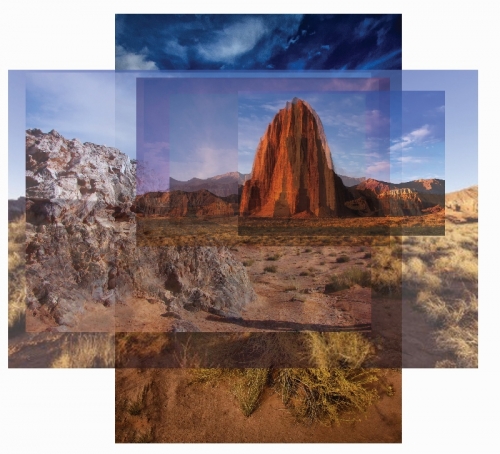 Utah Biennial: Mondo Utah is an anthropological look at the history past and present of contemporary art, folklore and culture in Utah. The theme of this first edition looks at the myriad ways in which Utah has been used as a site, subject, support, and material. Generating new projects and unearthing archival legacies, the exhibition demonstrates how Utah has produced its own language of contemporary art within our country’s cultural puzzle.

Soft Brutalism: A project for the Utah Biennial
By Aaron Moulton

This project is the outcome of a conversation between the artist Seher Shah and Matthew Antezzo.

In June of 2012 in Berlin, the two artists observed the housing complex on Böklerstrasse during a conversation about Brutalist architecture. The term “Soft Brutalism” was coined during this discussion to signify an architecture which is of the same spirit of the Brutalists but has a lighter appearance due to the use of color, rounded forms, or other details. It is a term which needs to be unpacked. This project is part of the ongoing conversation between the artists and this process of unpacking.

In preparing for the exhibition here at the Utah Museum of Contemporary Art, Antezzo recalled his time as a student at the University of Utah, where he studied photography under Joseph Moratta and was also a participant in the performance workshop lead by Paul McCarthy in the winter of 1984. While living in Salt Lake City, the artist also traveled extensively throughout the state with a fellow student at the time, artist David Baddely. Familiar with the museum, its building, and the surrounding environs—albeit a 30 year old familiarity—these memories provided a base to begin working.

In conversation with curator Aaron Moulton, Antezzo inquired about the public areas around the museum. Aaron sent materials and video, along with encouragement to do whatever the artist wanted within a certain time constraint, lack of necessary zoning approval, and, most importantly budget constraints. Within these parameters and in response to the architecture, Antezzo thought the context for the conversation about Soft Brutalism could be a productive way to approach the project; the process could be one of real freedom from planning approval and all take the form of drawing and presentation as you see here.

With this in mind, Antezzo invited Seher Shah to participate with him for the presentation at the Mondo Utah exhibition. With Shah in New York and Antezzo in Berlin, their collaborative processes were all done remotely. This activity of virtual site visit also informed the dialogue and opened possibilities for drawing on material from archives. Shah’s suggestion of a viewing space led Antezzo to consider how one reaches such a space. The notion of the step became the focus of the background content for his proposal for the UMOCA Plaza.

All these elements and ideas come together in the image of the UMOCA Square, as imagined by Antezzo. Three steps along the north edge of the embankment could serve as a place to overcome, to rise up and find oneself elevated, and able to see the Plaza in a new way, and perhaps raise one’s fist in unity, feeling very orange.