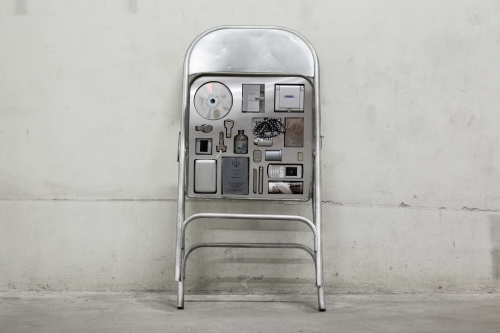 Nicosia, the capital of Cyprus and the last divided capital of the world, is a place where two opposing communities, Greek Cypriots and Turkish Cypriots, co-exist, separated by a buffer zone. A contemporary art gallery located on the edge of the old town centre, tellingly named The Office, plays on that paradox of the simultaneous purposes of locations.

Founded in 2009 by Tassos A Gkekas, a new exhibition takes the Greek gallery owner’s personal collection to VOLKS, a former Volkswagen warehouse, to stage Investment Opportunities. A similar riff on that contradictory theme, it presents works of contemporary art that Gkekas has collected over the years, with ‘no intention to display them’. Some pieces were gifted to Gkekas, some he acquired himself, having ‘built a special relationship with the work’.

The work is liberally spread out across VOLKS’ stark grey concrete space. There’s work by Francesca Woodman, the precocious photographer who took her own life at the age of 22 (in a parallel with Gkekas’ intuitive collecting, she did not plan to become a successful artist). Robert Montgomery, too, doesn’t much care for the personality cult that often surrounds great artists, but he’s become widely known for his works’ poetic, melancholy messages – shown at VOLKS in the form of typographic prints.