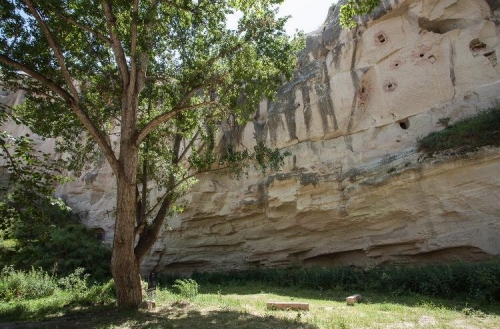 In it's 4th edition of Cappadox, the Contemporary art programme sets out with the theme Silence.

In our “post-truth” era when words have lost their weight, what potential meanings does silence carry?

Is silence a state of mind? Or a change of mind?

Is it a desire for tranquility or peace of mind in a world infused with noise? Is it an escape?

Is it an invitation to deeper insight? Does it foster an engaged awareness to reach a fundamental understanding of the world at the limits of language and meaning?

Is it fear? Or oppression?

Does silence act as a disruption, a break off or a pause? In Turkish, it reads as “sound-less.” But, is it possible to experience a literally pure, soundless environment?

Mostly used to describe random ambient sounds, silence has myriads of diverging and contrasting connotations, proposing multitudes of metaphorical meanings. It can be a form of communication, a particular type of utterance. Silence can indicate an approval or disapproval; it can express grief, horror, shame, anger, and also acceptance, respect, intimacy, joy. It can be:

“There is no such thing as an empty space or an empty time. There is always something to see, something to hear,” [2] says John Cage, for whom silence was never absolute.

Cage placed silence at the heart of his chance operations in constructing temporality in his aleatory music. He radicalized his approach in 1952 with his groundbreaking 4’33” performance. On the day of its premiere the audience sat in “pure silence,” awaiting his newest composition. The environmental sounds that were made while sitting and waiting became the piece; usually, silence marks the beginning or the end of a performance, however, in 4’33” silence is the performance. Pointing to unintentional and un-notated sounds, 4’33” calls for a conscious awareness of what is happening around us / to us.

Appearing at the edge of the reason, silence can indicate the presence of an absence, the unsayable or the unrepresentable.

Theodore W. Adorno wrote after the Holocaust that, “to write poetry after Auschwitz is barbaric;”[3] while he also wrote, “the need to lend a voice to suffering is the condition of all truth.” For Adorno, silence can mark the rupture in history / time, and conversely, it may denote the repression of a human’s primordial impulse toward voicing the truth. Likewise, Michel Foucault considers the act of keeping silent as a matter of oppression.[4] On the other hand, Susan Sontag says that when, “the prestige of language falls, that of silence rises,”[5] in reference to media-dominated culture.

So, then, what is silence?

With its extraordinary geological formation and multilayered history, Cappadocia is an exceptionally laden place. Cappadox 2018 is an invitation to experience what the silence may tell us in the midst of this unique geography.