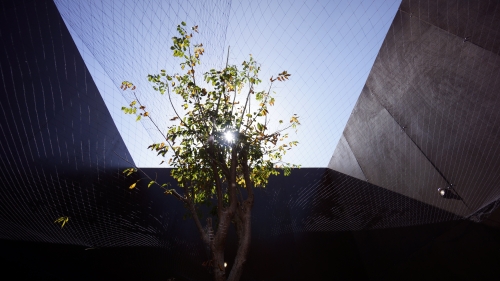 Alserkal Programming has appointed Hale Tenger for a commissioned public intervention guest curated by Mari Spirito, to be launched at Alserkal Avenue during Dubai Art Week in March 2018. Spirito is Founder and Curator of Protocinema, a non-profit organisation based between Istanbul and New York, and is the first guest curator to be invited to work on Alserkal Programming’s artist commissions. Alserkal Programming was founded by Emirati philanthropist Abdelmonem Bin Eisa Alserkal in 2015 with a mandate to support artists whose projects are collaborative, participatory, and ephemeral. It has commissioned 18 artists to date.

The form of Hale Tenger’s work follows the material vernacular of Alserkal Avenue’s existing buildings as a free-standing structure that visitors are invited to enter. Under originates from the artist’s memory of a fictional narrative that describes an ancient hunting ploy used by aristocrats. Nets were set in the woods much earlier than the hunting date, stretching low throughout the forest so that the birds became accustomed to living under the net, adapting by only flying low. Once the nets were removed the birds would no longer fly high, as if they had forgotten that the sky has no limits, thus becoming easy prey for the noble hunting parties. Currently, tens of millions of game birds are being bred at farms set in nature with nets, creating the same effects on these birds today, for bird hunting markets.