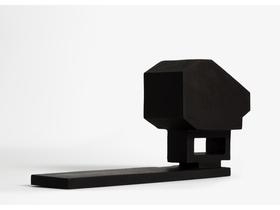 Throughout her practice, Seher Shah has consistently re-shaped representation. Working with both drawing and sculpture, she has revisited the mainstays of architectural representational methods—plan, elevation, section—to inject unsettling slippages into their rigorous formalism. If, in the past, her practice has knowingly toyed with the frontier between the resolutely rational and the vaguely visceral, this new body of work fully embraces that visceral slant.

Included in the presentation will be several of Shah’s Untitled cast iron sculptures that are derived from the actual woodblocks she used for her Hewn woodcuts. With these modestly sized sculptures, Shah enacts an inverse process of material transposition, creating attractive and weighty objects, but these are not ‘pure objects’ produced according to a set of dictates, pattern or order. They are neither anonymous nor neutral, but are inflected with a past. Accompanying the sculptures will be a series of 30 Hewn woodblocks, which were not cut by hand, but by machine, and that came out of the studies Shah had done for her previous Unit Object etchings. By casting the woodblocks she was attempting to extrude the two-dimensional form left on paper from the actual Hewn woodcuts into three dimensions.

Flatlands, presented here in 4 ink-on-paper panels framed, springs from an attempt to reinterpret the language of mark making. By abstracting the purely rational language of architectural drawing, Shah introduces an element of playfulness. Uncertainty abounds: scrims shift, their translucency preventing any clear foreground or background to emerge; grids are atop grids, morphing into columns. The seriousness of the perspective view is undercut, and architecture becomes a space newly open to experience and feeling.

The presentation will also include a drawing from her recent Brutalist Traces series, those “ghosted” images that teeter between presence and absence. This series eerily freeze-frames daunting Brutalist structures that at once dominate the landscape and are isolated within it. Shah dissolves the buildings in her drawings, using line no longer to faithfully render, but to abstract and erase. 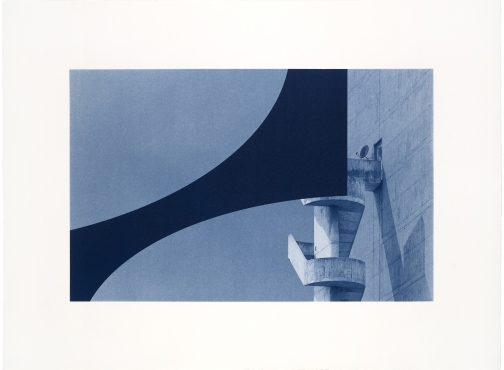